And another exciting 7DRL challenge draws to a close, with the completion of Beware of Strange Warp Points! You can download it over at the Bitbucket page. I added a pretty comprehensive user manual this morning, so hopefully folks won't be too confused by the myriad stats and abilities!

Now to announce it over on /r/spaceempires, and maybe the roguelike subreddits, if other folks are spamming them with 7DRL announcements too...

And then I think I'm going to email Aaron Hall about this thing, and see what he has to say about it!
Posted by Ed at 6:17 AM No comments: 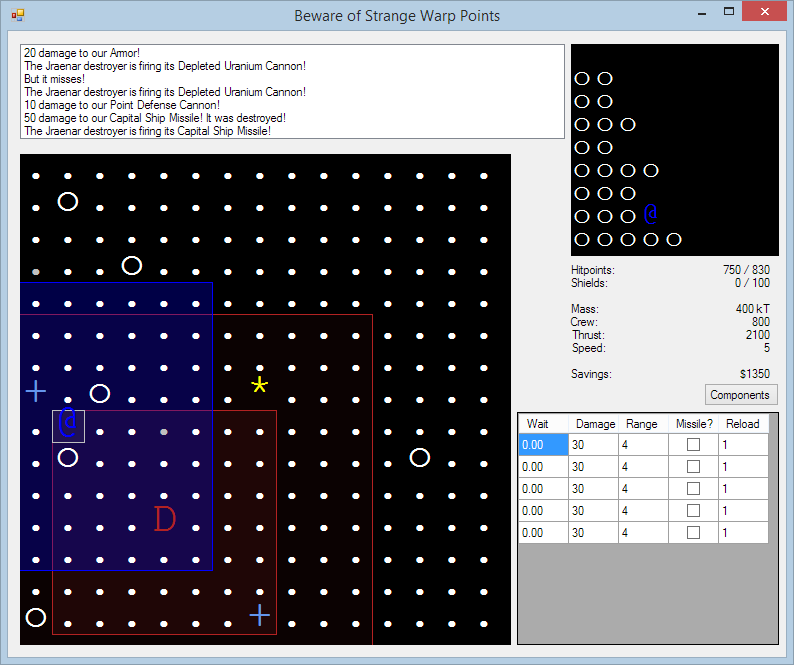 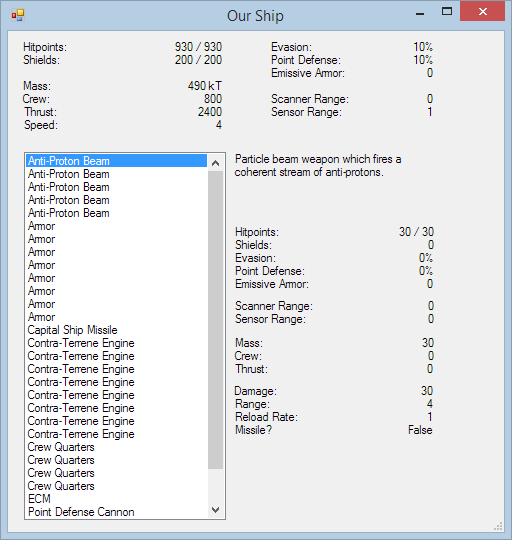 Today's task was much easier than I'd anticipated. I generally don't care much for UI work because it involves lots of fiddly data binding, but most of the UI work I did today for the shop screen, I was able to copy over from yesterday's ship report. So I don't have a screenshot today, because it's not really all that interesting!

As for game mechanics, you get salvage equal to half the cost of any remaining components on destroyed enemy ships, and half the saved build rate of destroyed enemy shipyards. I might have to adjust this (or make the starting player ship weaker), though, if this makes the game too easy. You don't get free minerals when you discover an allied colony, but once you discover it, you can bump it at any time that there aren't enemies in the system to get free repairs and to buy new components. Don't worry, the game won't let you buy a component if it would make your ship go derelict due to lack of engines or crew!

Each colony has a random selection of 5 components that you can buy from it, with infinite stock of each. Of course, there are only 3 components defined in the data files so far, so all colonies sell the same things for now! But things will get interesting tomorrow once I start adding more components!
Posted by Ed at 1:14 PM No comments:

Today I added components to BOSWP. I actually didn't do it quite the way I planned - I'd originally intended to have separate classes and data files for each type of component (e.g. engine, weapon, shield), but I realized I could just make one generic component class which can have all the various component attributes. This way you can make a component that's both a weapon and an engine, for instance! (Thraddash afterburner from Star Control much?)

I am storing the component data in a JSON file, though. Components have a name, description, cost, mass, and max hitpoints, and then the optional abilities, which are currently limited to crew, thrust, and weapon, though I'll eventually add more like shields and scanners. I was going to have a "bridge" component which destroys the ship when lost, but that seemed a bit unfair, so I limited ship destruction to reduction of speed to zero (dead in space) or crew count below mass (drifting away aimlessly). Or of course loss of all components, but in pretty much all cases, one of the other scenarios will happen first!

It's interesting to note that as your ship (or an enemy ship) loses components other than engines, it will actually go faster, since its mass is reduced but the thrust stays the same.

Enemy ship designs are stored in a JSON file as named lists of components. (The player's starting ship is of course stored in its own file.) I replaced the generic red "J" for enemy ships with the first letter of the ship name, so scouts will appear as "S", destroyers as "D", etc. This should help with threat analysis! Of course they won't change to other letters as they lose components, so you'll have to keep track of them. Enemy shipyards will tend to save up for the most expensive ship possible (currently a battleship), though they have a small chance each turn of splurging on whatever they can afford on any given turn. (Might want to check that that's game turn, not player turn, now that I have a proper speed system!) They will also build immediately (if possible) to defend themselves when the player ship is present in their system. 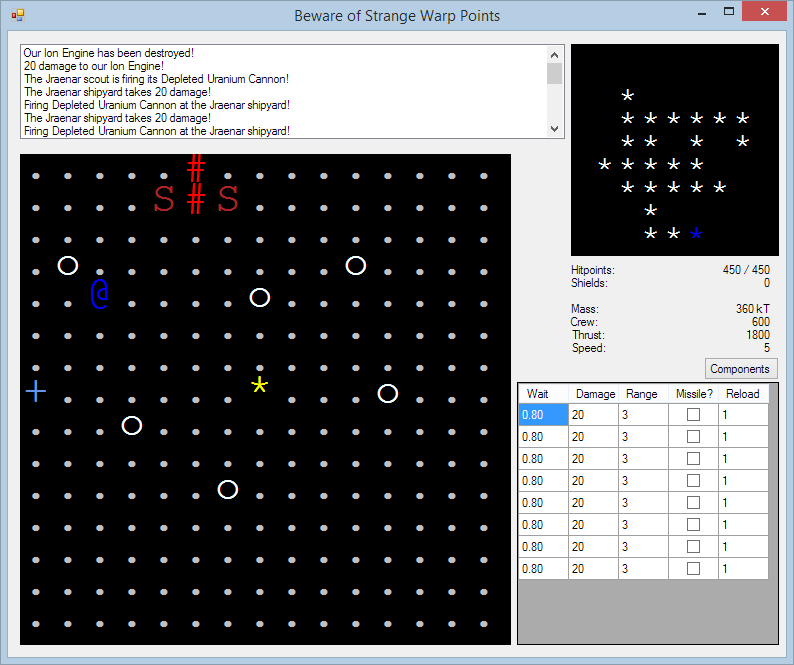 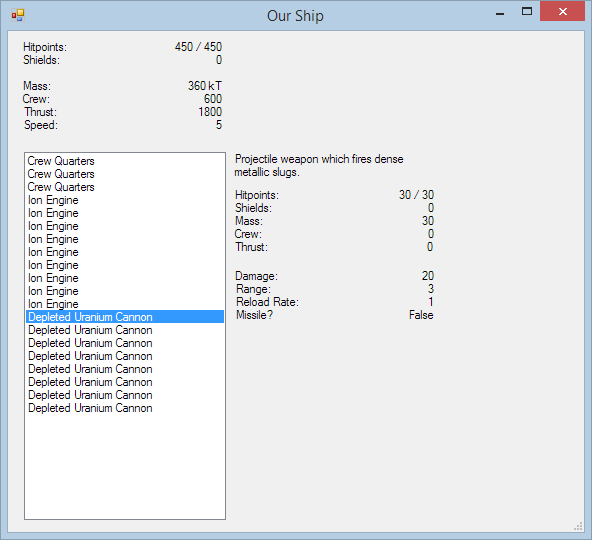 So, today I implemented enemies, and a very basic form of combat. Basically, your ship automatically fires at the nearest enemy that's within 3 squares (though it prioritizes shipyards over ships - if you want to attack a ship, just retreat from the shipyard and the ship will gladly follow you). The enemy ships will of course fire at you, too, and they will try to pursue you. Eventually when I add different weapons, I might have them try to stay at some optimal range, but for now they just try to get right up in your face. If you're not in the same system as an enemy ship, it will instead randomly patrol the galaxy, going from warp point to warp point.

There really aren't all that many enemies spawning at the moment, but the game is still pretty hard, if not impossible, because there's no way to repair your ship between battles. I guess when I add friendly colonies, I'll have to add repairs, too. Since destroyed components will be permanently lost, I think giving the player free repairs to any components that are damaged but not destroyed should be reasonable, assuming there aren't too many friendly colonies. And maybe the player can only be repaired while there are no enemies in the system...

A funny thing happened with the enemies, actually. As soon as I added the enemy shipyards, the game froze! At first I thought it was because the code to build enemy ships was extremely inefficient, but I optimized it, and it still froze. Then I noticed that the shipyards were churning out ships very fast, and their saved build rate was shooting up to ridiculous numbers! (It costs 1000 points to build a ship right now; I saw a shipyard with over 200,000 build rate saved!) Then it occurred to me - I was letting the enemies take turns continuously between player turns! So I made it so the enemies could only take one turn per player turn, and that solved my problem. Of course, tomorrow when I add components like engines, I'll implement a proper speed system, but for now, a 1:1 player/enemy speed ratio should be good. 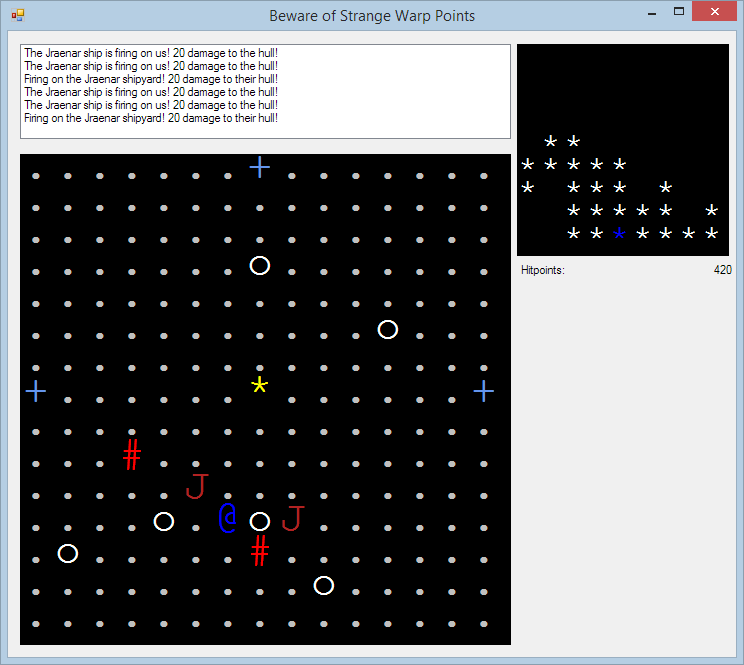 So, I think I accomplished my goals for today. And it's only 8 in the morning, how about that! I've got a cave-like grid of star systems, and each system contains a star, some planets, and warp points leading to the adjacent systems. The player can move his @ about on the star system map, and moving onto a warp point teleports him to the next star system over. (I decided to make warping automatic instead of requiring a keypress just to keep things simple, and not require that the game allow more than one space object per sector.)

If you'd like to check out my code, you can grab it over at Bitbucket. I've also got a screenshot in case you just want a quick glimpse at the game: 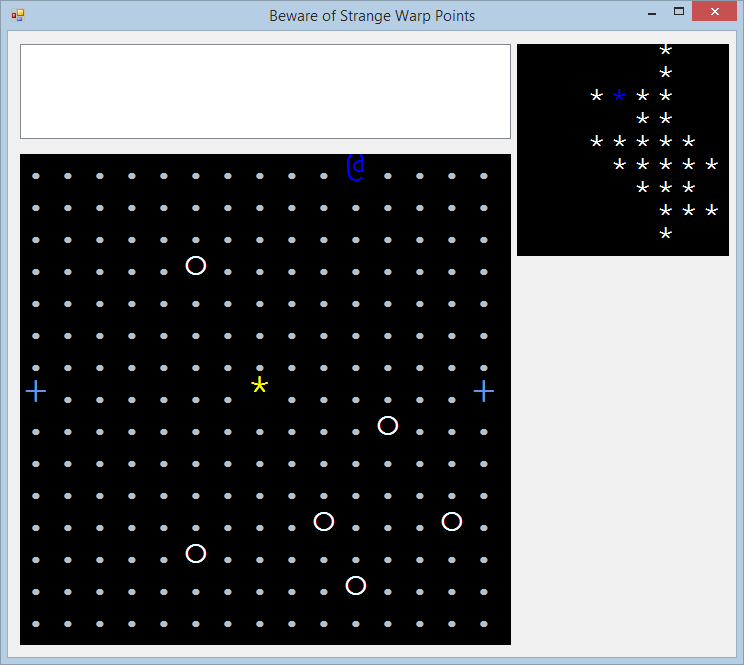