Now TriQuest has monsters! Unfortunately, they just appear as ASCII symbols, and since there's no combat besides moving onto the monsters to kill them (or being moved onto yourself and dying), you can't really tell what is what. They do have names and stats, I swear!

I also added the formation change mechanic I'd alluded to yesterday. You can press F to change formation; then you're prompted to place each of the characters in turn using the numpad. Doing so consumes a turn (don't do it on rough terrain or it will cost more time), but if you change your mind you can press F again to cancel without wasting a turn.

Here's a screenshot of the game with some monsters: 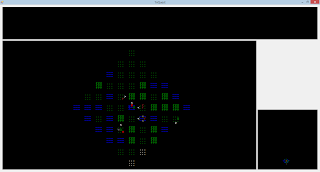 The blank area up top is the message log. I couldn't capture any messages because it seems that pressing a key (such as to take a screenshot) clears the log, even if the key is not an actual game command. Oh well.

Tomorrow, combat! I've got some interesting ideas for how I'll do that - I've already got some stats set up for the heroes and monsters, and basically fighting will involve rolling dice based on a pair of stats, one for the attack type (physical or magical), and one for the role one is playing in combat (attacker or defender). Attackers will use the attack type that is likely to inflict more damage, so (for instance) the mage will only attempt a physical attack if the target has a high magic stat. And then there's range - attacks will be degraded based on the range to the target (in subtiles), so that's where the formations come in! Just like in Final Fantasy, your characters will be able to rush to the front lines to inflict more damage, or retreat to the back to lessen the damage they take - except that enemies will come from all four sides, so the lines of battle constantly shift!
Posted by Ed at 4:17 PM