Day 4, and I've got basically a fully functional game! Sure, a few pieces are missing, but they're not essential to having a working roguelike. (Though it would be nice to have some sort of victory message when you defeat the final boss... not that I've actually found him yet! Probably some sort of healing potions would be nice, too, so you can survive long enough to find him...)

So, combat. Formation definitely matters now. Place the heroes you want to do the damage dealing (and the damage receiving) near the enemy; place the others (or the ones with the longer ranged attacks) in the back. You can attack someone who's out of range, by the way - you just take a rather large accuracy penalty: you have a 1 in 3 chance to miss for each subtile out of range that the target is! But the same penalties apply to monsters, too... except that for some reason the monsters sometimes like to target heroes in the back instead of in the front! Not sure what's causing this, but it seems to be related to the way you're facing, or maybe they way they're facing...

Since now you have hitpoints to keep track of, I also added a stats box, which shows the stats of each hero in your party. Later I plan to let you look at enemy formations to see their stats, too.

Here's a screenshot of the game - not much has changed, but if you're actually playing it (which you totally can, in case you forgot - just check out the code at https://bitbucket.org/ekolis/triquest) you'd notice lots more messages in the log pertaining to combat! 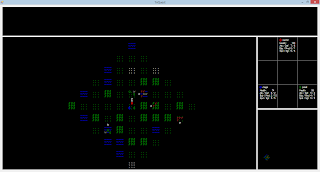